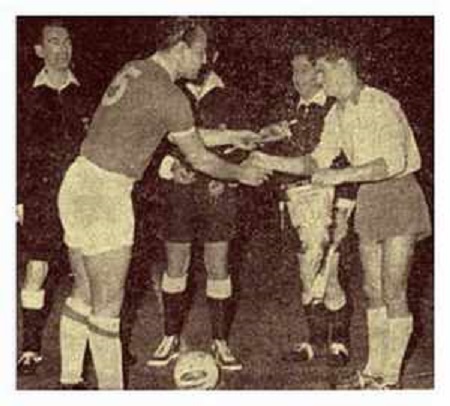 
Blues produced a fantastic performance in Brussels to clock up a two-goal advantage to take into the second leg at St. Andrew´s. The players took heed of their manager´s warning regarding the over-officious refereeing but still found themselves on the wrong end of 21 foul decisions to the anger of boss Beasley, who fumed afterwards: "We must have some standardisations before this business gets out of hand. I think Continental referees should be invited to this country by the FA and given the opportunity to referee Central League and Football Combination matches."
But Blues did not let the referee´s whistle put them off their stride and despite the setback of conceding an early goal from Jean-Pierre Janssen´s free-kick, the visitors hit back to go in 2-1 up at the break. After Bryan Orritt narrowly missed with a header, right winger Harry Hooper levelled with a fine effort from close range after beating two St. Gilloise defenders. And Hooper became the creator to set up Johnny Gordon to complete the turnaround.
Roger van Cauwelaert equalised for the home side two minutes into the second half but this only served to spark Blues back into life and Taylor´s clever solo effort in the 71st minute was followed up by Barrett´s second goal in as many matches for the club, set up by Orritt, to seal a tremendous 4-2 victory.
Hooper was undoubtedly the star of the show giving the home defence a torrid time and the winger admitted afterwards: "This win will do us the world of good. We felt a bit better after winning on Saturday and winning again will bring back much of the confidence we all agree we have lost."


It would be very amiss not to mention the fact that this game marked the 551st and final appearance of long-serving goalkeeper Gil Merrick in league and cup games for Blues. The 37-year-old had initially decided to hang up his boots at the end of the 1958/59 campaign and was informed via a letter from manager Pat Beasley that his services were no longer required. This came as a shock to the loyal one-club man who thought he would be offered a place on the backroom team and even turned down the chance to become the player-manager of Barrow so confident was he of being kept on in some capacity by his beloved Blues.
However, a meeting with chairman Harry Morris soon saw Merrick installed as reserve team manager at St. Andrew´s. But just five weeks into the new season and Blues´ poor start persuaded Beasley to call on the experience of Merrick once more for the first team. Two league appearances against Burnley and Leeds followed before his final hurrah in Brussels. Merrick contracted flu after the St. Gilloise game and was unavailable for the next match so Johnny Schofield was recalled and he retained the goalkeeping responsibilities for the remainder of the season, by which time Merrick had been appointed as the new first team manager. 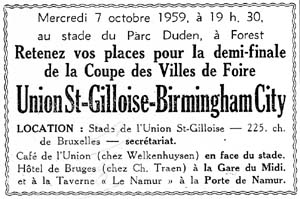