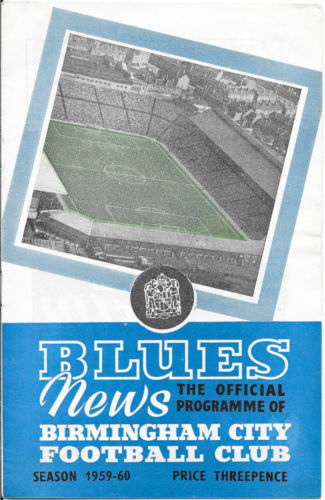 BLUES STUTTER AHEAD OF SECOND LEG

Just three wins from their opening 16 league games left Blues languishing in the First Division relegation zone after two months of the 1959/60 season. In fact only a second half equaliser from Jim Barrett prevented Pat Beasley´s side from suffering an embarrassing reversal at home to rock bottom Luton Town at St. Andrew´s on the Saturday before Union St. Gilloise´s visit in the second leg of the Fairs Cup semi-final. Blues were in need of a morale boost and it came with a chance to become the first British club to reach a European final.
Goals from Harry Hooper, Johnny Gordon, Brian Taylor and James Barrett had seen Beasley´s team return with a 4-2 lead from the first leg in Brussels. But it was by no means going to be a formality to finish the job at St. Andrew´s against the Belgium league leaders who boasted an unbeaten record in domestic matches during the opening months of that campaign. Both teams knew that their likely opponents in the final would be Spanish giants Barcelona, who had drawn 1-1 in their away semi-final first leg against a Belgrade X1, so it was a highly attractive and lucrative prize to aim for.
St. Gilloise had sent a ´spy´ to watch Blues´ league matches as they looked to formulate a plan to try and overturn the 4-2 deficit. They would have seen little to fear in the 1-1 draw against the Hatters. However, Beasley opted to swap around his forward line for the European challenge with only outside-left Taylor keeping his berth. Gordon moved to inside-forward, Barrett to inside-right, Hooper to inside-left and Mike Hellawell came in at outside-right in place of Bryan Orritt, who was ruled out due to his commitments with the Army side. Beasley was forced into another change at left-half with Dick Neal confined to his bed with tonsillitis, providing a rare opportunity for Bunny Larkin. The Brummie had been put on the transfer list at his own request having played only six times that season but he was to be a given a chance to shine in this Fairs Cup clash.
Beasley warned his troops ahead of kick-off: "Do not be over-confident just because we have a 4-2 lead from the first leg. St. Gilloise come here in a nothing-to-lose frame of mind and carelessness can cost us the game."

SMITH UP FOR ENGLAND FIGHT
One player had more reason than most to show that he had what it takes to compete with the best players in Europe. Blues defender Trevor Smith earned two full caps for England during the early weeks of the 1959/60 season following the retirement of Billy Wright. However, in the build-up to Blues´ big cup game, Smith learned that he hadn´t made the Three Lions squad for the next international.
"I am determined to fight my way back," declared the no-nonsense centre-half. "I don´t suppose the fact that I have been playing in a struggling Blues side has helped me to reach peak form and, perhaps, I could come back more quickly to my best if everything was going right for us. But it is up to me to fight my way back to my best. I have never felt fitter and I will do my best to regain my England place."
Unfortunately Smith never did get another chance to pull on an England jersey although he made up for it with his European exploits with Blues, starting with the second leg against St. Gilloise at St. Andrew´s.

BLUES CRUISE THROUGH IN THE FOG - 11 November 1959
Only 14,000 fans were lured away from the warmth of their armchair on a cold and foggy November evening at St. Andrew´s but those that did were rewarded with another goal-fest and the chance to witness a piece of British history.
However, supporters may not necessarily have seen too much of the action on a murky Midlands night which saw the ground enveloped in a blanket of mist and fog.
It was difficult for any of the spectators to view the game although the Belgian visitors were more visible in their light-coloured shirts.
Once Johnny Gordon fired Blues in front on the night after just 15 minutes the game was all-but over as a contest. Larkin then marked his return to the side with a 25-yard pile-driver to put Blues into a 6-2 aggregate lead with 45 minutes of the tie to play. The fog became thicker after the interval and nobody could quite see how Gordon doubled his night´s tally and the way in which Jean-Pierre Janssens grabbed one back for the visitors to make the aggregate score 7-3 going into the final 15 minutes.
The visibility was so poor that there was even doubt as to whether the game could be completed but fortunately it was. The last notable action came with two penalties, one for either side. Firstly Diricx scored from the spot after a handball by a Blues player and then, with the last kick of the match, Harry Hooper scored from 12 yards after Gordon had been brought down.
Blues had become the first British club to reach a European final and waiting for them in the showpiece event was Barcelona, after they successfully progressed through their semi-final tie with a 4-2 aggregate success over Belgrade.

TAYLOR INJURY BLOW
A victorious night for Blues was marred by a broken leg suffered by Brian Taylor after 18 minutes of the match. The winger fell to the ground in obvious pain after an innocuous challenge from Belgian international Henri Diricx. Taylor was taken to Birmingham Accident Hospital where it was discovered that he had sustained a compound fracture of his left leg. Boss Pat Beasley commented: "Brian is the type of lad who is perky enough to overcome a handicap like this. But it is a great pity that his career has been temporarily halted at a stage where he was showing his best form." It took Taylor a year to return to action and unfortunately he was never quite able to rediscover his top form. 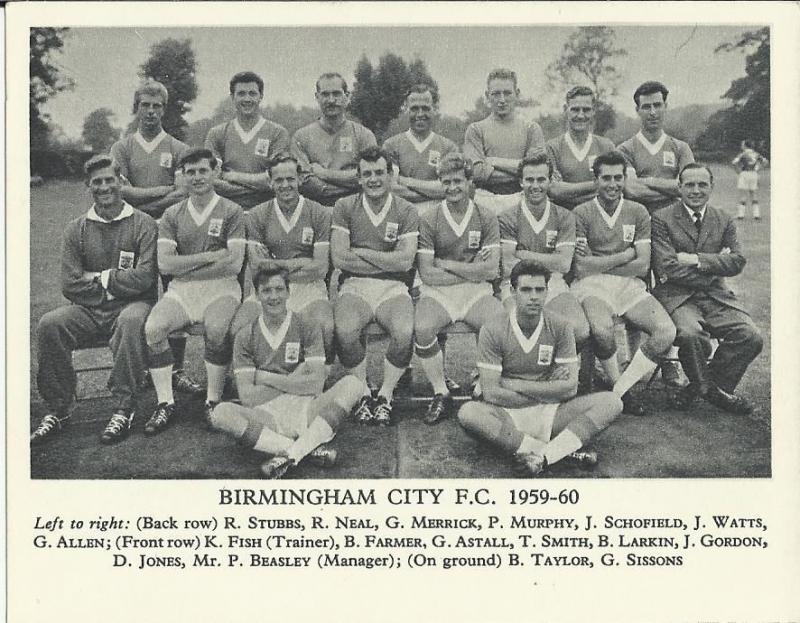 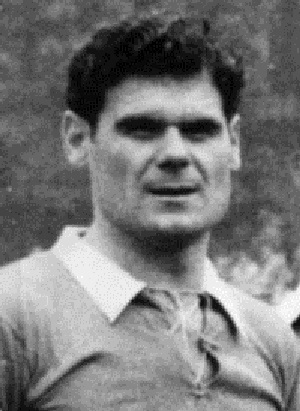 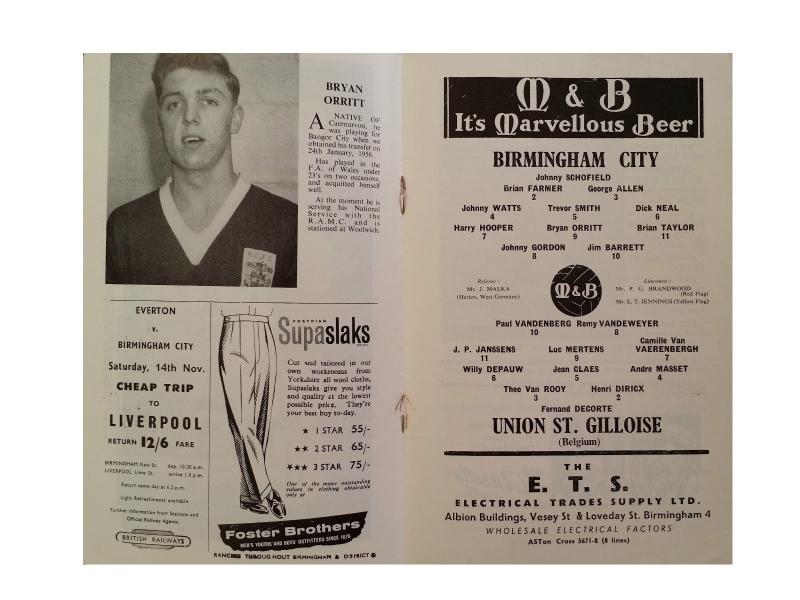 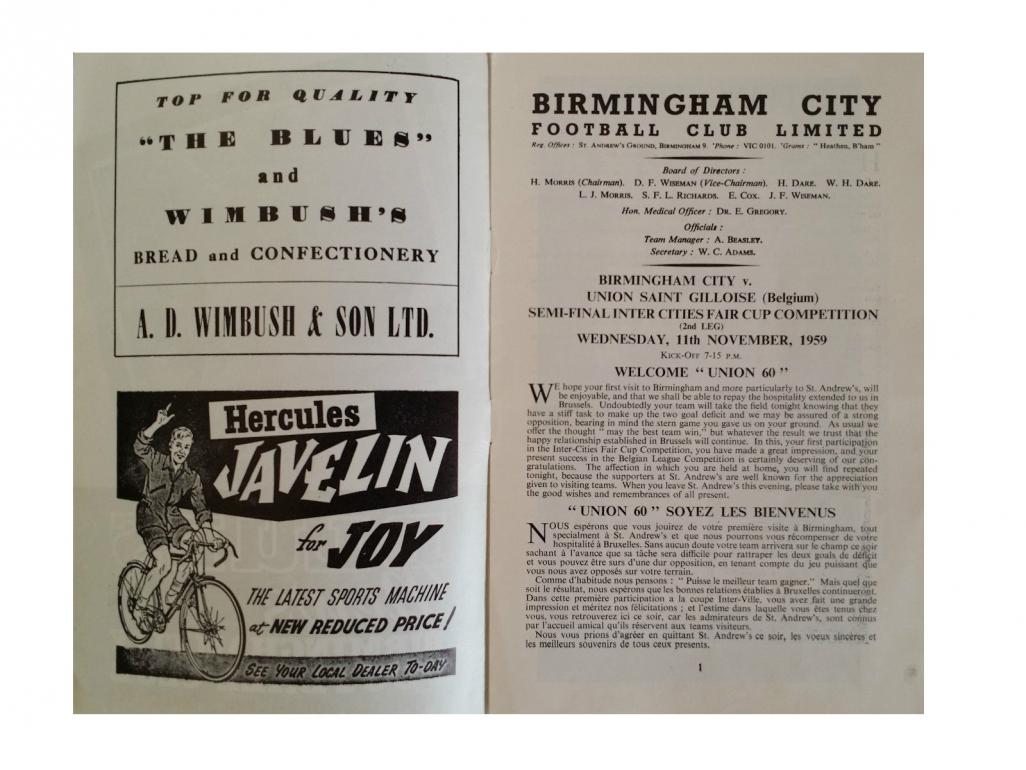