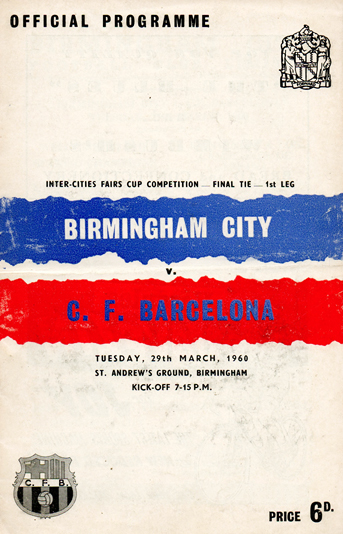 THE FINAL COUNTDOWN
Blues and Barcelona were enjoying vastly differing fortunes ahead of their eagerly-awaited showdown at St. Andrew´s.
The English club were languishing second from bottom of the First Division and without a win in their previous four fixtures. Pat Beasley´s team would have climbed out of the drop zone had they held onto a first half lead given to them by Don Weston in their last game before the European clash away to fellow strugglers Luton Town. But the bottom side rescued a draw courtesy of a penalty leaving Beasley´s side in a spot of a bother in the league and hardly the best preparation for taking on what was considered to be the best club team in the world.
In contrast Barcelona were fresh from a 3-0 victory over Betis that retained their position at the top of the La Liga table. Helenio Herrera´s side were high in confidence, so much so that they turned down Blues´ offer of training facilities and instead prepared for the big match with a shopping trip around Birmingham.
The size of the challenge that lay ahead for Blues had been brought into sharp focus earlier that month when Barcelona completed a 9-2 aggregate win over reigning English champions Wolves in the European Cup quarter-finals. Winger Harry Hooper admitted to Blues News recently: "After the hammering they gave Wolves at Molineux all the press were saying that we would need the scoreboard from Edgbaston because there would be a lot of goals!" But when asked ahead of the game whether his team were daunted by the prospect of facing the mighty Barca, boss Beasley insisted: "Overawed? Why should we be? We start level with Barcelona…and every team has its day - or night."

RARE CHANCE FOR ORRITT
Blues made one change from the side that had drawn at Kenilworth Road three days earlier with Bryan Orritt earning a recall at outside left in place of Billy Hume.
The out-of-favour Welshman had not featured in the team for over three months and looked set to be on his way out of St. Andrew´s before this opportunity rose. The 22-year-old was clearly determined to make the most of his chance as he spent the morning of the game doing extra training to ensure peak fitness.
Manager Pat Beasley commented: "He is the man I want to fetch and carry in the forward line. Bryan can be useful both in an attacking and defending sense from the inside-left position."
Barcelona travelled to the UK without tricky inside-forward Luis Suarez due to injury but otherwise Helenio Herrera´s side was at full strength.


Blues delighted the 40,000 crowd inside St. Andrew´s with a terrific defensive display to earn a highly creditable draw against Barcelona.
Pat Beasley´s charges produced a much improved performance on a quagmire of a pitch that had pools of lying water due to heavy overnight rain. The illustrious visitors were not given any time on the ball and were not allowed to create the type of openings that had seen them fire five goals past First Divisions champions Wolves at Molineux four weeks earlier.
Johnny Schofield was forced into routine saves from a header and shot by Sandor Kocsis and then pulled off an impressive stop from Ramon Villaverde´s effort but otherwise the Blues keeper was largely untroubled during the opening period. Trevor Smith and Dick Neal were in particularly good form in the Blues defence and they stood firm again after the interval to repel any Barcelona advances towards the home goal.
Towards the end Blues´ best chance of pulling off a shock win when Don Weston was put through on goal but unfortunately the surface came to the visitors´ aid and Enrique was able to clear the danger. The Blues striker recalled afterwards: "It was a beautiful ball through to me but the ground was wet through, the ball stopped dead in the water and I just went over it!"

MANAGERS´ REACTION
Both team bosses were satisfied at the end of the goalless stalemate at St. Andrew´s. Blues chief Pat Beasley urged his players to carry this form into their league matches, admitting: "I´m only hoping that it will give them a spur." Beasley defended allegations that the visitors simply went through the motions due to their impending European Cup semi-final against Real Madrid. He insisted: "If a team are held -as Barcelona were last night - then their reputation slips a little and no side can afford to take any match lightly. Any team, including Barcelona, can only play as well as their opponents allow them to play."
Beasley´s opposite number was glowing in his praise of Blues. Helenio Herrera said: "Above all else, the Birmingham fighting spirit was excellent. Trevor Smith and Harry Hooper were excellent players. We are quite satisfied with a draw in such a match - we regard it as a victory. We played as well as we did at Wolverhampton." 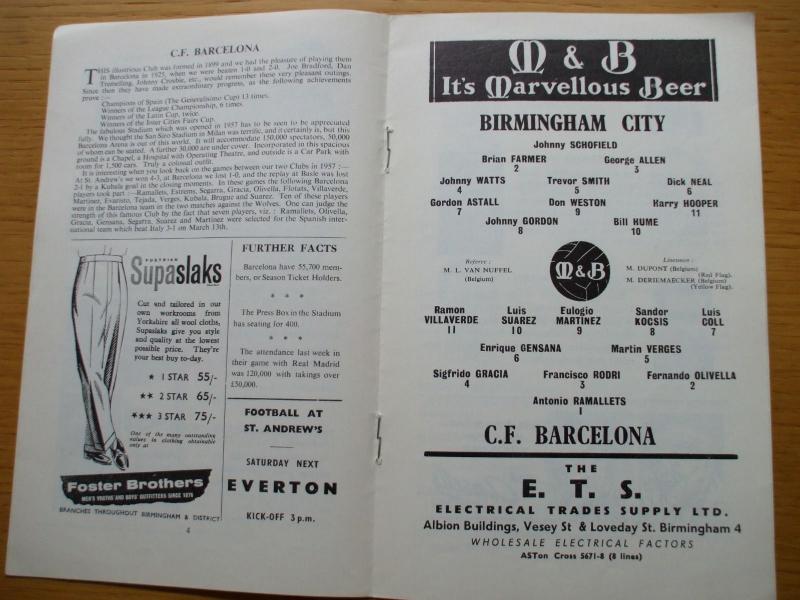 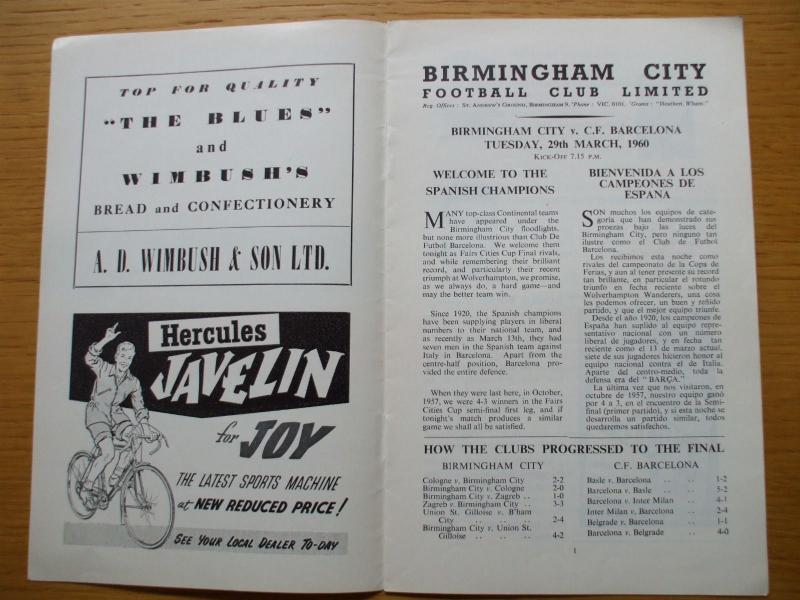 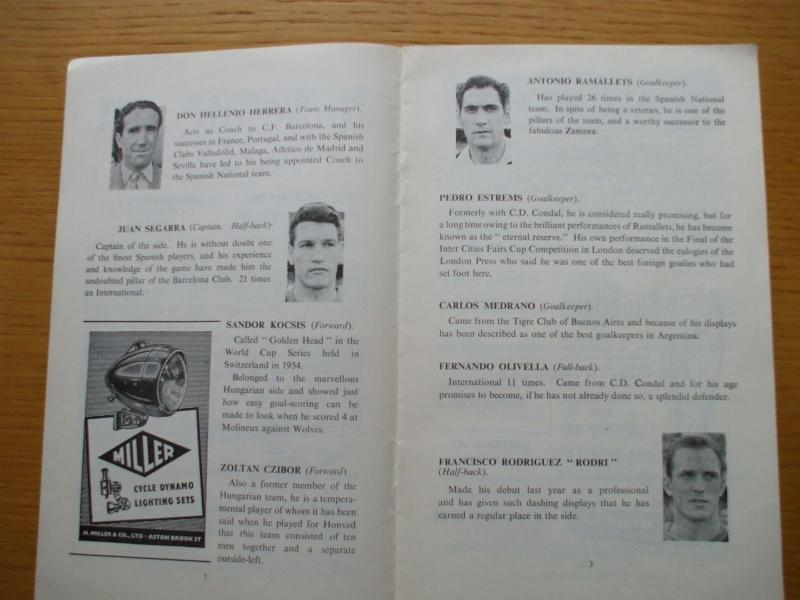 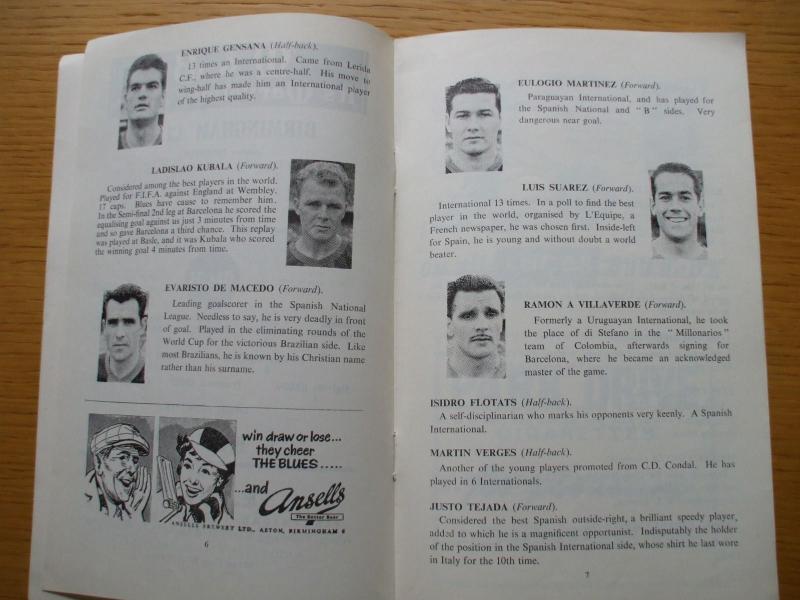 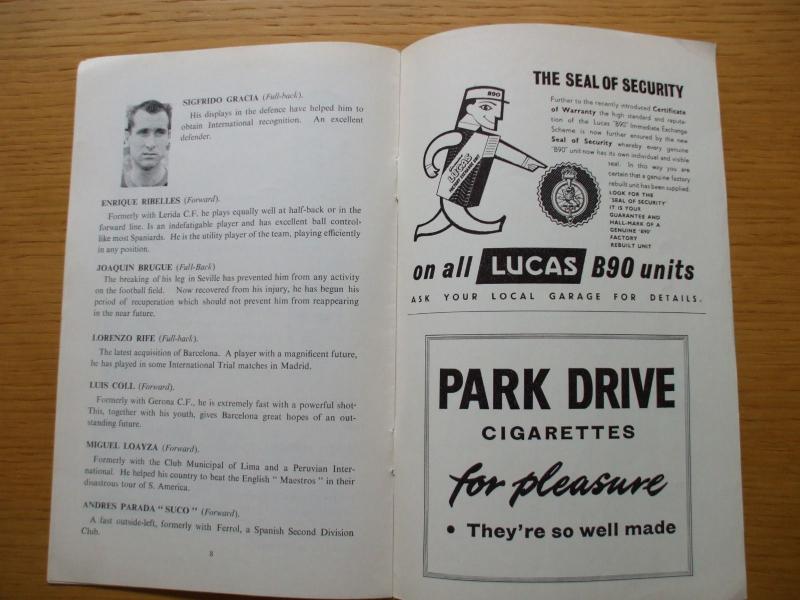