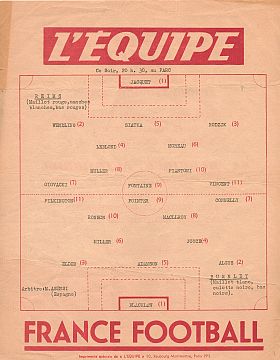 Half a century ago, Burnley had beaten French Champions Stade de Reims in the first ever European Cup tie played at Turf Moor and set out to France to protect that lead and win a place in the quarter finals.

Goals from Jimmy Robson and Jimmy McIlroy, our two inside forwards, allowed us to go to the second leg with a two goal lead, but the trip to play the game in the national Parc des Princes Stadium proved to be anything but smooth running both on and off the field.

Over 200 ardent Burnley supporters made the journey to Paris and that number would have included Mr Roy Kilby, dad of current chairman Barry. For many it was a case of getting to the game and straight back to Burnley as soon as possible.

The official party themselves didn´t have the journey they had planned. The coach took them to Ringway Airport but the flight met with delays and they were some hours late on arrival at Le Bourget Airport in Paris before a coach took them to the Hotel Scribe.

Burnley had a fully fit team but there was good and bad news for Reims. The brilliant Juste Fontaine had missed the first leg with injury but he was back. However, they were now without Raymond Kopa who had suffered a knee injury. Regarded as the finest double act in Europe, they would again be able to field only one of them against Burnley.

What a night it proved to be. A difficult night for certain but one where our heroes proved to be just that. We lost the game 3-2 but that was enough to give us a 4-3 win on aggregate. Despite conceding three goals it was considered a triumph for Harry Potts´ defence plan and for Potts himself it proved to be a more than interesting night against a side that used every cheating trick in the book.

John Graydon travelled on behalf of the Burnley Express and he wrote: "Burnley gave one of their greatest ever displays. Before a fanatical crowd of 45,000, whom I rate the most unsporting, one-sided and dangerous I have seen, in wide travels, in many different lads, the Burnley players conducted themselves in a manner in which made them amongst Britain´s greatest sporting ambassadors.

"For good measure, in long spells, they also revealed an artistry equal to that of Reims, who, never forget, have for several seasons been rated second only to Real Madrid as the leading Continental team."


With a crowd displaying the kind of fanaticism one normally associated only with the Spanish bull-ring, Burnley´s plan was to get a goal early and that´s what they´d been practising for seven days ahead of the game.

It took just over half an hour, 32 minutes to be exact, and Burnley did snatch the lead when ROBSON, always on the alert for the half chance, seized on a Miller shot, following a free kick by McIlroy, which rebounded off the crossbar, to beat Jacquet easily, and that gave Burnley a firm grip on the tie.

The whole Burnley forward line began to move with grace and speed, while Pilkington and Connelly, on the wings, repeatedly split open the Reims defence with well placed passes and accurate centres. Had Burnley got a second goal at that stage, the whole pattern of the game would have changed.

As it was, five minutes into the second half, Reims scored a rather soft goal when a half hearted effort by PIANTONI drifted through a sea of legs to roll just inside the upright.

With the crowd roaring the home side on, Burnley were fortunate to have captain Adamson at centre-half. He stood out as the most accomplished player on the field and three times he headed away centres which looked as though they could bring goals.

But, on 57 minutes, it was right-back RODZIK, who collected a loose ball to put Reims into a 2-1 lead with a tremendous drive. Reims were now playing some tremendous football.

At that stage most people thought the Burnley goal would fall again, but on 75 minutes CONNELLY received the ball in his own half of the field, and then zig-zagged his way past five Reims players to snatch the equaliser. It was one of the finest goals scored in a European cup tie at the time.

The French were staggered and the crowd were floored and went silent, but once more opened its lungs as the fireworks again flew on and a minute later RODZIK popped up to get a third and give Reims a 3-2 victory on the night.


It was enough to take Burnley through but the ungracious French side refused to shake the hands of the Burnley players. Graydon wrote: "Unlike most British teams, they obviously don´t believe in the maxim, ´Be gracious when you win and smile when you lose´."

Burnley were through but for manager Harry Potts there were problems. Potts charged onto the pitch to move the ball back as the home side stole some yards. He explained: "I saw that Reims were getting an unjustified advantage by replacing the ball for free kicks after the referee had turned his back.

"They did it three times and something had to be done about it. That´s why I ran onto the field. My sole intention was to draw the referee´s attention to what was happening. I think I succeeded for the Reims players did not do this sort of thing again."

Potts, with the home fans clamouring to get to him, was led to safety by the Gendarmes. The biggest problems the Burnley players faced had also come from the hostile supporters with Connelly coming close to being hit by a bottle.

The Gendarmerie had to call upon special reserves after the game to get the Burnley party out and back to the airport. They made it clear to demonstrators there must be no trouble and eventually their supporters stood to applaud the brilliant Burnley side as they left with some young French boys winning autographs from the triumphant players.

Burnley were in the quarter-finals and would now have to await news in the following week as to who they could play next. With Barcelona having beaten Real Madrid they had become favourites with Burnley now second favourites to win the European Cup.

The teams at the Parc de Princes were;