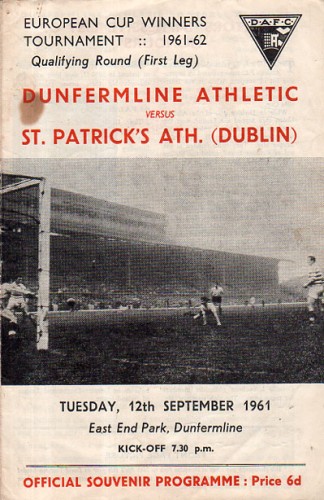 Following the euphoria of their Scottish Cup win against Celtic, at the start of season 61/62, the Athletics players and supporters were eagerly awaiting their first taste of European competition, following the clubs entry in the European Cup Winners Cup. Only the fourth Scottish club to venture into a European competition, the Pars were following in the footsteps of Glasgow Rangers, who in the inaugural season of the competition, reached the final, only to lose to Italian giants Fiorentina 4-1 on aggregate.

When the draw for the Preliminary round was made, there was perhaps some disappointment that instead of the anticipated continental visitors, St Patricks Athletic from Dublin would provide the opposition. St Particks would be no pushovers, as in the previous ten years they had won the Irish League Championship three times, participated in three FAI Cup Finals, winning twice, won the Dublin City Cup twice, as well as winning the League of Ireland Shield. They had gained entry into the 61/62 ECWC by beating Drumcondra 2-1 in the final of the Eire Cup.

The week prior to the tie Pars manager Jock Stein had travelled to Dublin to watch St Patricks in action against Shamrock Rovers. After his visit Stein was quite confident and thought that the Irish side shouldnt present too much of a problem. He told the Dunfermline Press that the team was a good ball playing eleven, who had an impressive record in cup competitions. A keen struggle was expected at East End Park and it was important that Dunfermline established a good margin of victory in the first leg, so that there was something in hand for the second leg.

St Patricks meanwhile had no illusions about their task. They hoped to learn from the experience, and to make new friends along the way!

The Press reported that tickets for the game on the Tuesday night had been selling steadily, although not enough to suggest a sell-out.

There was still some confusion over the venue for the second leg. Initially the game was to be played at Dalymount Park, home of the Irish international team. However, Dalymount had no floodlights and therefore kick-off would need to be at 1800 hours. For a later kick-off, Tolka Park, home of Drumcondra, the Irish League champions would be made available. Discussions were continuing.

With season 61/62 still in its infancy, the Pars had only played two league games prior to the St Patricks tie, losing 3-2 away to Dundee United, followed by a 2-1 home victory against Hearts. In their League Cup group, the Pars had finished second behind Motherwell, winning two and drawing three of their six games.

The Pars easily disposed of St Patricks at East End Park. In what was a brilliant first half display, the Pars scored three goals, and looked set to add to their tally after the break. However the promised deluge never materialised, which was mainly due to a change of attics by the Dubliners, who concentrated far more on the defensive aspects of their game in the second half. The Pars did manage to add a fourth goal to their tally just before the end to give them a healthy three goal lead for the return leg in Dublin a fortnight later.

The Pars started the game well and after just 3 minutes an excellent chance to open the scoring was passed up, when the ball flashed across the St Patricks goal with no takers. Lowry then had to save well from Melrose, whilst Peebles hit the post with a low shot, and Duffy shot narrowly past.

With the Dubliners well out of the game, even at this early stage, it was only a matter of time before Dunfermline got the opener, and it duly arrived after 15 minutes. Mailer lobbed the ball through for Smith, who squared the ball to Harry Melrose to lash the ball into the net.

Seven minutes later, and the second goal arrived. Duffy passed the ball into George Peebles path, and having got a break following McCarthys challenge, the inside forward picked his spot in the net.

The Pars went three up in 28 minutes, and by this time they were dominating the game. A Cunningham free kick was launched into the box, and with three players contesting, the ball skimmed off McCarthys head into the net. Although Dicksons presence had caused the goal, the big centre forward refused the congratulatory handshakes offered by his team-mates.

In 32 minutes Connachan finally had a save to make from Peyton. Four minutes later, an Alex Smith drive was headed off the line by White. Then, one minute on, and against the run of play, St Patricks scored. Peyton sent a long ball through to ORourke, who beat Connachan with a low drive.

Lowry did well to turn aside a Melrose shot, whilst at the Pars end, Connachan pulled off a wonder save from Redmond. Finding himself out of goal and on the ground, Eddie had to turn in mid-air to prevent the Irishmans shot from reaching the net.

After the break, Lowry was again busy as Dunfermline looked to increase their lead. Following a great Pars move Smiths netbound header was grabbed on the line by Lowry. Excellent chances then fell to both Mailer and Dickson, whilst St Patricks also saw a number of chances wasted. Then with just three minutes remaining, Dickson flashed the ball across the face of the goal, for Tommy McDonald to head home the Pars fourth.

Despite holding only a three goal lead ahead of the second leg, the Pars domination was worthy of a far greater lead, suggesting that the return match in Dublin would be little more than a formality. 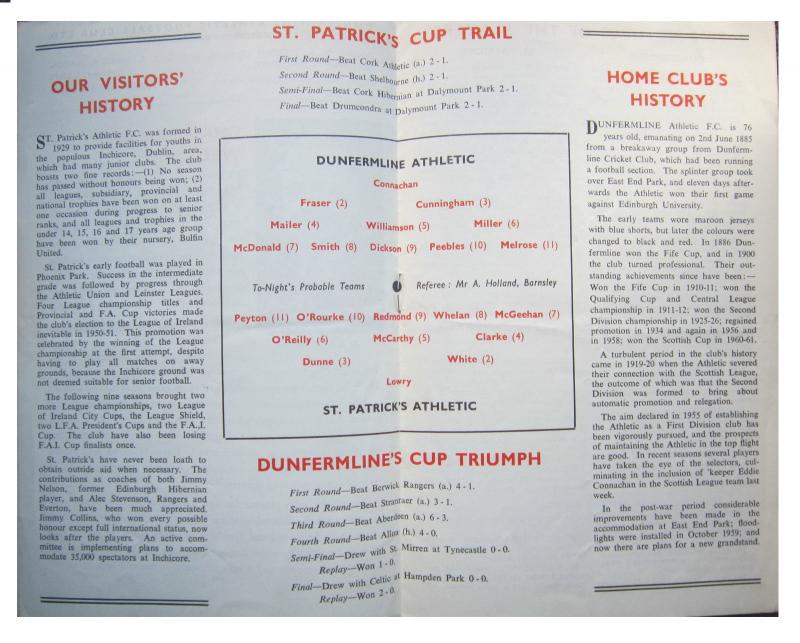 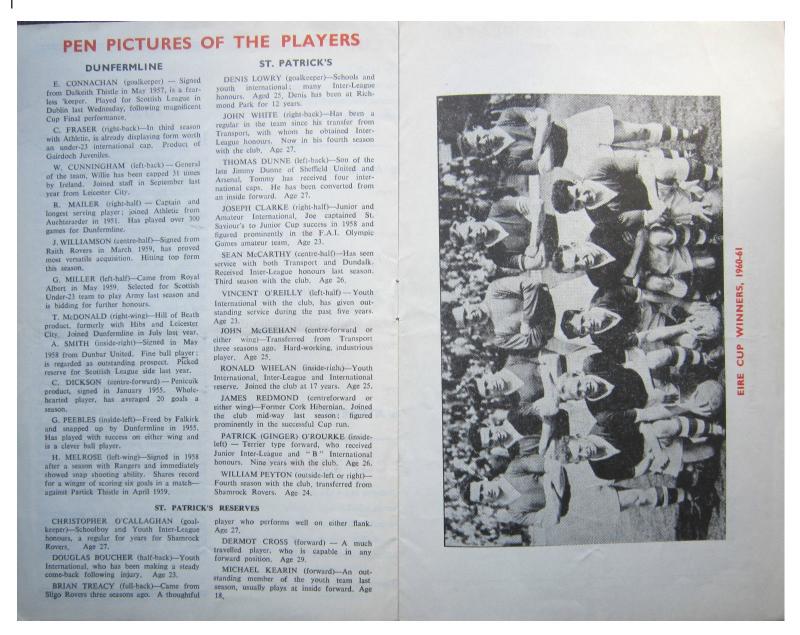 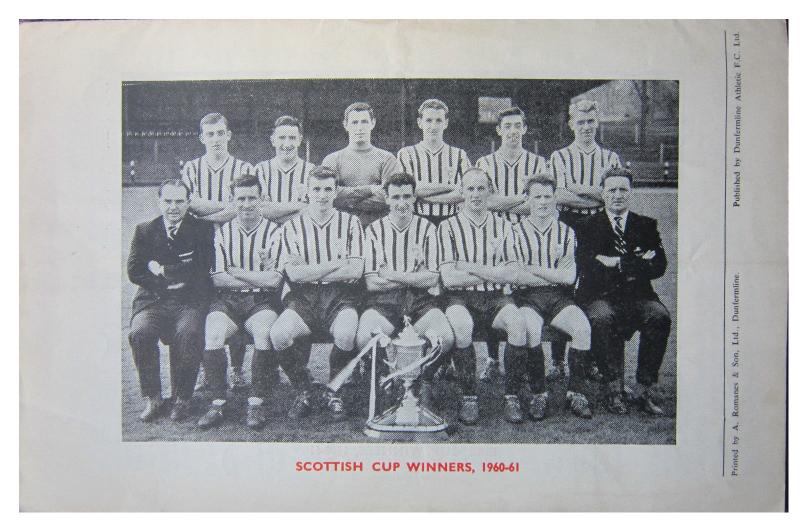 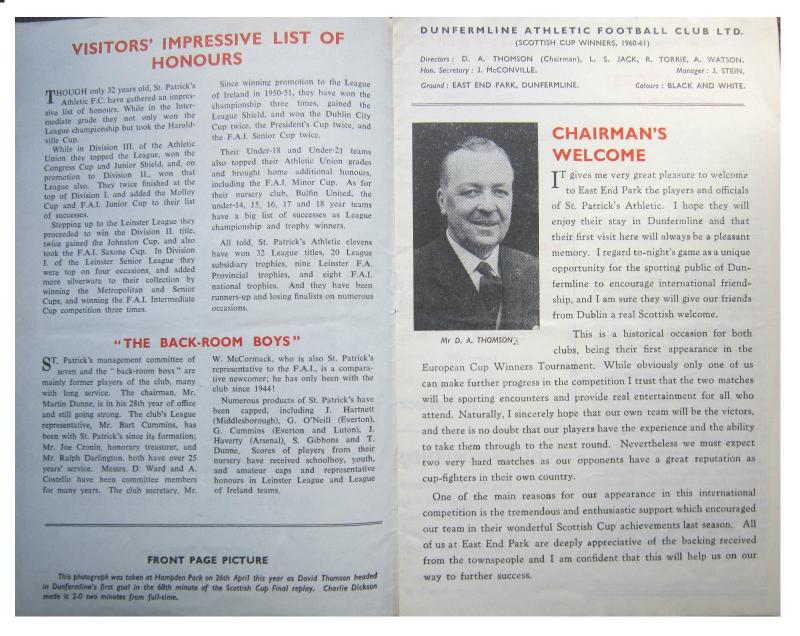