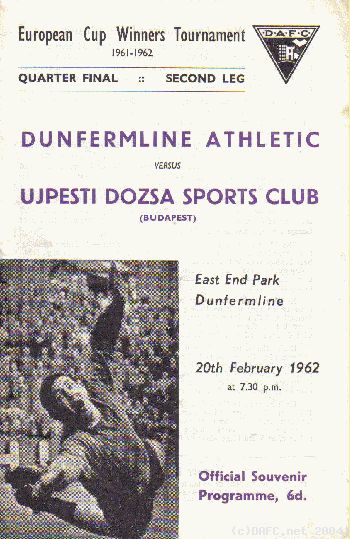 The Ujpest party commenced their long journey to Fife on the Friday before the game. Taking a train across Europe, they arrived at Dunfermline Lower Station at 8 am on the Sunday morning. During the day, a special coach was laid on to take them on a tour of the Kingdom, whilst in the evening a short training session was held at East End Park.

On the Monday, the party journeyed to Glasgow, for shopping and a visit to Ibrox and Hampden. That evening an official reception was held in the Town Hall, where a film of Dunfermline´s cup victory against Celtic was shown.

Following their return from the first leg in Budapest, the Athletic had played Stenhousemuir in the third round of the Scottish Cup. Despite Charlie Dickson getting the ball into the net, the final 0-0 result meant that a replay was required.

Manager Stein made one change from the team that played in the first leg, with full-back Cammy Fraser coming in to replace Ron Mailer.

With well known players and officials from all over Scotland present amongst the capacity crowd, silver and pipe bands entertained the crowd, some of whom had arrived at 6pm, until the scheduled kick off time of 7.30pm.

The Hungarians who had only 30 minutes of light training since they arrived in Dunfermline, came out onto the East End pitch some 20 minutes before kick-off, and carried out loosening up exercises prior to warming up with the ball.

Skipper Cunningham won the toss, and after the national anthems, to the roar of the crowd, the match commenced.

Dunfermline started the match eager to pull back the one goal deficit, and straight from the kick-off launched into the attack. An early McDonald drive was just over the bar, but there was also a reminder as to just how dangerous the Hungarians could be, as Solymosi shot narrowly past.The Pars then pressed Dozsa back in their own half, and keeper Lung was kept busy. A Thomson shot was just deflected round the post.

Thomson again came close, and Smith beat Lung to a cross ball, but there were no takers as the ball bounced across the front of the goal. There was then a bit of a rumpus amongst the players as Lung was charged following a McDonald corner. In 38 minutes Connachan made his first real save from a Solmosi free-kick. For the remainder of the first half, Dunfermline had the upper hand, but failed to make any impression on the Ujpest goal.

Dosza resumed the second half in better style and Connachan parried a shot and took the rebound confidently. In 51 minutes came the goal, and a further blow to Dunfermline´s hopes. A free-kick to Dosza a couple of yards outside the Athletic´s area, was placed neatly across the goal, and up popped Bene to head easily past Connachan.

The goal was a real set back to Dunfermline´s hopes, but they upped their efforts and Melrose missed a fairly easy chance. McDonald then had two excellent chances which were squandered.

Tensions amongst the players increased, and Kuharszkhy was warned by the referee. For long spells Connachan was the only man in the Dunfermline half, whilst his opposite number, Lung, was kept very busy. By now the Hungarians were resorting to fairly crude tactics to stop the Athletic, and with the crowd fully wound up, Sovari was cautioned by the Danish referee.

The final action of the game saw a superb save by Connacahan from Rossi.

Whilst the match saw an end to the Pars 61/62 European odessy, the 1-0 defeat by Ujpest proved to be the Athletic´s only home defeat during the glorious European sixties.