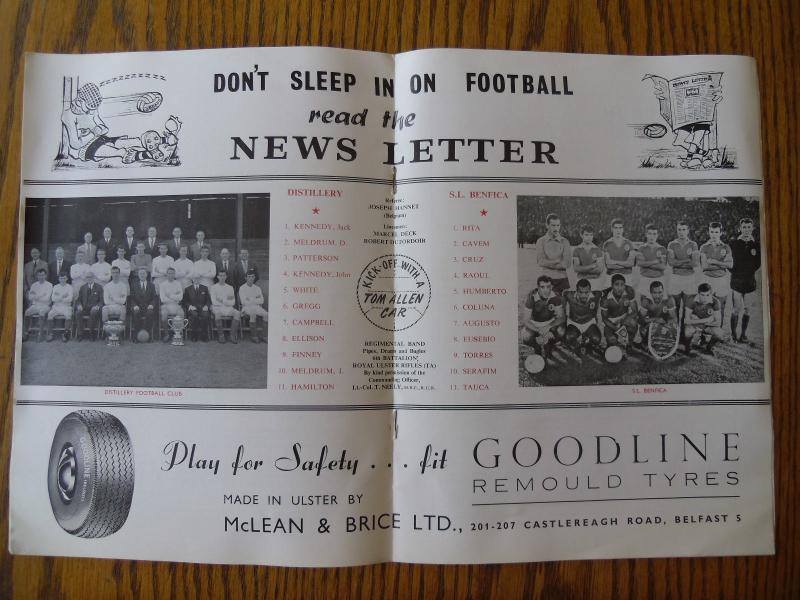 The early part of this decade was a successful time for the Whites. George Eastham continued to build a quality team and the season 1962/63 saw Distillery win two trophies: -- the League Championship and the City Cup, as well as being runner-up in the Irish Cup. They also won the CAS in 1963/64 but they then slumped to the lower realms of the League for the rest of the decade. The arrival of Jimmy McAlinden as manager saw the period end in optimism as they were once again runners-up in the Irish Cup in 1968/69.

1 JOHN ´ JACK ´ KENNEDY made his debut on 3-5-58 when he was suddenly dropped in at the deep end to play in the CAS semi-final --- his next game was the Final, which the Whites unfortunately lost. However, he did go on to win 4 trophies during his 8 season Distillery career, making 244 appearances. He helped win the City Cup 1959/60, the League Championship 1962/63, the City cup 1962/63 and the CAS 1963/64. he was selected three times for the Irish League and was signed by Glasgow Celtic in march 1965. He later moved on to have a lengthy career with Lincoln City.

2 DEREK MELDRUM was signed from Glenavon making his debut on 1-9-62. He played in both full-back positions and later on played in the half-back line. He helped win the League, the City Cup and the CAS and played in the losing Irish cup final of 1962/63. he played in the first Irish Cup Final of 1968/69 but missed the replay through injury. In this era he made 316 appearances and scored one rare goal against Ards on 16-4-68.

3 SYD PATTERSON was a whole-hearted player who made his debut on 16-9-61 at left-back. He also played at right-back and left-half in his career. He won medals in the City Cup 1962/63,and CAS 1963/64. He also turned out to be a superb striker when on 4-12-65 he was moved up to centre-forward and scored 13 goals in 22 games. He played twice for the Irish League in his Distillery career which comprised of 157 appearances and 14 goals in 5 seasons. In August 1966 he moved to Ards, then Glenavon and Glentoran.

4 JOHN H. KENNEDY was a stalwart right-half for Distillery over 12 seasons since his debut on 21-12-57. In his career he also played at inside-forward, right-back and centre-half. He was involved in four trophy wins:-- the City Cup 1959/60, the League championship 1962/63, the City Cup 1962/63, the CAS 1963/64, and scored a vital goal in the European Cup game against Benfica. On 4-11-67 he broke his leg against Bangor, which put him out of action for a season. He played four times for the Irish League and finished his Distillery career with 427 appearances scoring 25 goals. In August 1969 he joined Bangor.

5 GEORGE WHITE made his debut as an 18 year old on 4-9-52 and played 6 games before joining Coleraine in April 1953. Six years later he was signed from Glentoran for £200 in May 1959 and re-established his Distillery career. He was a towering centre-half and he played a vital part in four trophy wins. In 8 seasons he made 261 appearances and scored 2 goals which were both scored on 24-2-62 when he played at centre-forward.

6 FREDDIE ELLISON had already played for Ards and Crusaders before joining from Ballyclare Comrades and making his debut on 20-8-60. He helped win the League Championship 1962/63 and City Cup 1962/63 and in his Distillery career played at wing-half, inside-forward and full-back. In April 1964 he emigrated to South Africa but he returned to the club via Ballymena United in November 1969 to play a few games. He played once for the Irish League. In five seasons he made 157 appearances and scored 5 goals

7 GERRY McCAFFERY made his debut at inside-left on 25-11-61 though he origonally established himself as a winger. In 1962/63 he helped win the League Championship and City Cup. He was transferred to Leicester City in January 1963 but returned in March 1964 to help win the CAS. He got a new lease of life at the start of 1968/69 when he was moved to striker becoming a lethal consistent scorer. He was transferred to Glentoran in December 1969 having made 235 appearances with 96 goals in this era. He returned to the club to play for three seasons in the mid-seventies.

8 ROY WELSH made his debut on 15-8-59 and took part in four trophy wins. He played in all forward positions and occassionally at right-half and won two Irish League caps. He was transferred to Glentoran in November 1967 after having made 268 appearances with 68 goals in this decade. He returned in 1971/72 to play mainly at full-back for 4 seasons and later on had two successful spells as team manager.

9 JOE MELDRUM was a phenomenal striker who is the Distillery post-war record goal scorer. He made his debut on 19-12-59 scoring twice and he helped win the League Championship and City Cup in 1962/63. He missed out on a CAS medal in 1963/64 as he was ineligible, having played for the RUC in the first round. He played four times for the Irish League and in 6 seasons he scored 172 goals in 197 appearances. In 1965/66 he played a season for the RUC then joined Crusaders.

10 BILLY KEENAN actually made his debut on 14-3-59 at centre-half. In 1959/60 he moved to inside-right and started to rattle in the goals. He helped win the City Cup that year and in 101 appearances he scored 64 goals. He played once for the Irish League.

11 KENNY HAMILTON continued his career as Distillery’s regular left-winger for 5 more seasons and in this decade he helped win the League Championship and City Cup in 1962/63. He played three times for the Irish League in this period. He was a superb servant to the club and finished his 13 season career with a total of 356 appearances and 153 goals. In August 1965 he moved to Glentoran.
Reserves:---

Mike Pinner was an acrobatic keeper with experience in the English League including Manchester United and Chelsea.

Alan McCarroll was a sturdy whole-hearted player who could play midfield or defence.

George O’Halloran was a lively centre-forward who joined from Brantwood.

Johnny Cochrane was an ex-Brighton and Exeter player who scored 64 goals for the Whites.

George Lennox was a tricky left-winger and an ever-present at the end of the decade.

Brian Hamilton played at inside-right before moving on to Linfield and international honours.
Загрузка...