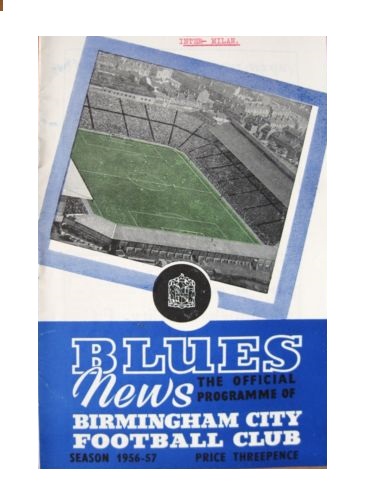 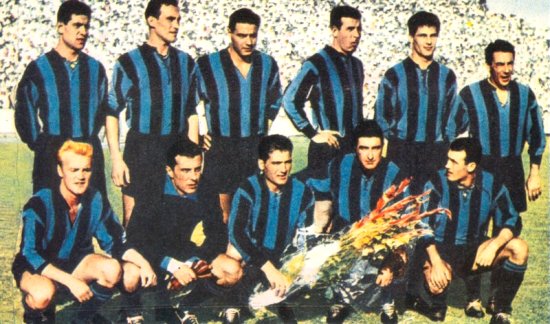 Blues´ first involvement in European competition has begun in encouraging fashion with a goalless draw away to the mighty Inter Milan.
Yugoslavian side Zagreb were then despatched home and away - a single goal success for Arthur Turner´s troops on their travels following by a 3-0 victory at St. Andrew´s.
This just left the return match against the maestros from Milan and, despite the decent start to life in Europe, Blues needed to win this final group game because their opponents had not only matched the 1-0 win in Zagreb but then won 4-0 back in Italy so therefore boasted a one better goal difference.
Although confusion reigned in the build-up to the game with Turner quoted as saying: "I am not quite certain about the position but I think goal average will count so we have got to win to reach the semi-final."

TRIO RETURN
The Blues team of 1956/57 were struggling to match their history-making sixth-placed finish of the previous campaign and were without a win in nine Division One games ahead of Milan´s visit to St. Andrew´s.
The Fairs Cup group decider came as a welcome distraction from the league for Turner´s team, particularly after their 5-1 hammering at the hands of Tottenham Hotspur at White Hart Lane just four days earlier.
The Blues boss had demoted regular first-team strikers Eddy Brown and Alex Govan to the reserves on that weekend but the pair were recalled, along with Johnny Watts, for the midweek match against Milan.
In the games against Zagreb both teams had been allowed to use outfield substitutions up until half-time with a change of goalkeeper permitted at any time.
For this encounter it was decided that only keepers could be introduced to the action with Turner explaining: "This is what we agreed upon for the first ´leg´ in Milan last May. There will be no other substitutes."
This was in a day and age when subs were not common place at all and, in another unusual move, Blues played in red and white to allow their visitors to don their famous pale blue and black stripes.

LONG JOURNEY FOR MILAN
Following the Superga air disaster of 1949 that had wiped out the whole of the Torino football team, Inter had opted to embark on any overseas trip by land and boat only.
This meant that it took the Milan players a whole 24 hours from departing their homeland to arrive at their Leamington hotel base.
Even after that tiring journey, it would still be a tough challenge for Blues as they faced up against an Inter side boasting no fewer than seven internationals.
Goalkeeper Giorgio Ghezzi, left-half Fulvio Nesti, right-half Enzo Bearzot, left-back Giovanni Glacomazzi and centre-forward Benito Lorenzi had all represented Italy while the team also included two imported international stars, Swiss outside-right Roger Vonlanthen and Swedish outside-left Lennard Skoglund.
Whilst Blues were floundering for form, the opposite could be said of their illustrious visitors who had recovered from a poor start to the campaign and were now lying in second place in their domestic league, hot on the heels of city rivals AC.

Nearly 35,000 crammed into St. Andrew´s for this all-or-nothing clash and witnessed an impressive start from the foreign visitors.
Inter wasted three good chances during the opening 15 minutes that could have put the tie beyond doubt but as the game went on Blues grew in belief and got the opening goal that they so desperately needed just before the interval.
Gordon Astall surprised the Italians by putting a low free-kick into the area rather than a high ball and, after two Blues players jumped over it leading to more confusion, Govan was left with the simple job of shooting past Ghezzi.
The Blues number 11 was in the right place again 11 minutes after the break to convert Brown´s inch-perfect right-wing cross as the two returnees to the side made their point to the manager in the best way possible.
Inter opted to use their sub keeper Enzo Matteucci at this point, which seemed a little harsh on Ghezzi who was hardly at fault for either of the goals. And the deputy shot-stopper denied both Brown and Peter Murphy as Blues looked to make sure of the victory.
Lorenzi did grab a consolation for the Italians just two minutes from time with a neat lob but it was too little, too late. Inter were left to curse their poor finishing during the opening stages of the game which could have led to a very different result.
And after the game, the name on the lips of the Italian club´s officials and journalists alike was that of Leeds United striker John Charles, who had been strongly linked with a move to either Inter or Juventus.
Ironically Blues came up against the big Welsh international in their next match at home to Leeds and even though Charles notched a brace, the win over Milan had clearly given Turner´s team a terrific boost and they ran out comprehensive 6-2 victors with Govan claiming his fifth hat-trick of the season.
Incidentally, it was Juve and not Inter that came up with a then-British record fee of £65,000 to lure Charles to Italy just a few days later.

MURPHY BLASTS VISITORS´ PHYSICAL APPROACH
After the Milan game many of the Blues players felt aggrieved by the spoiling tactics employed by their illustrious visitors.
The Inter team included some of the great showmen of the game but they could also mix it with the best when they needed to.
Blues´ inside-left Peter Murphy commented: "I was fed up long before the end. We were nudged, tugged and generally obstructed every time we went up the field. I spotted Gordon Astall going down the line and moved into the middle anticipating his cross. But before I reached the penalty area, one of these characters put out his arm as if he was driving a van around the city centre and I was stopped in my tracks!"
But ultimately Blues ground out the result that they required leaving boss Turner satisfied.
The St. Andrew´s chief concluded: "Milan played far better than this when we went to Italy but our lads fought well enough."

Next - Blues made it through to the semi-finals of that first Fairs Cup campaign and their opponents in the final four were none other than Spanish giants Barcelona in a two-legged affair. 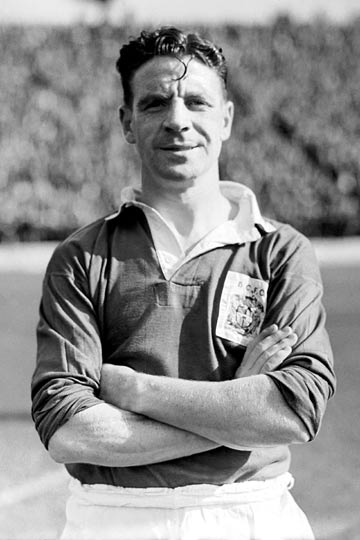 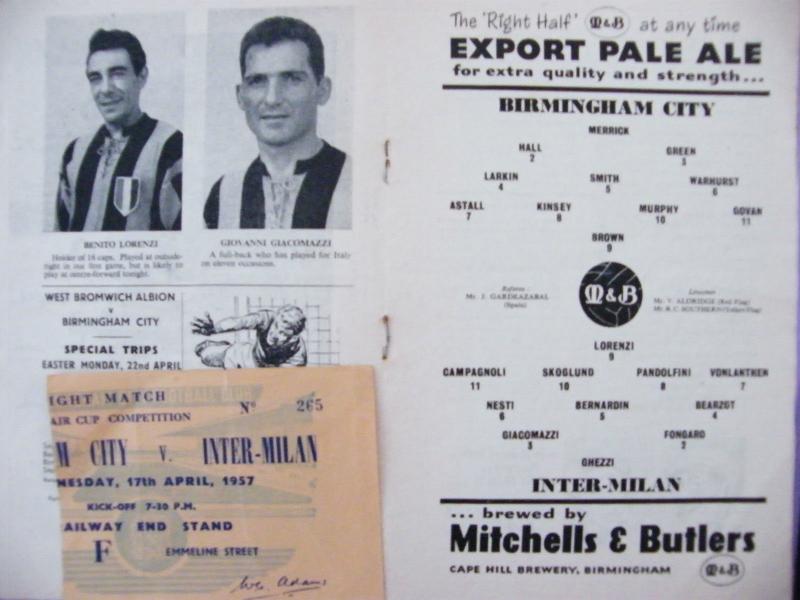 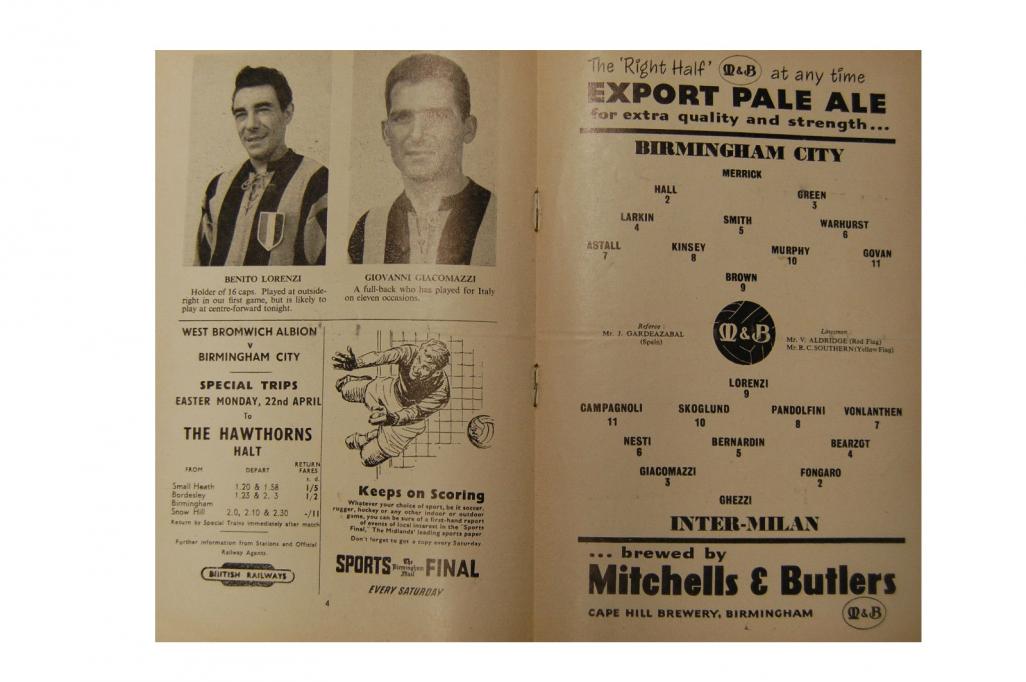 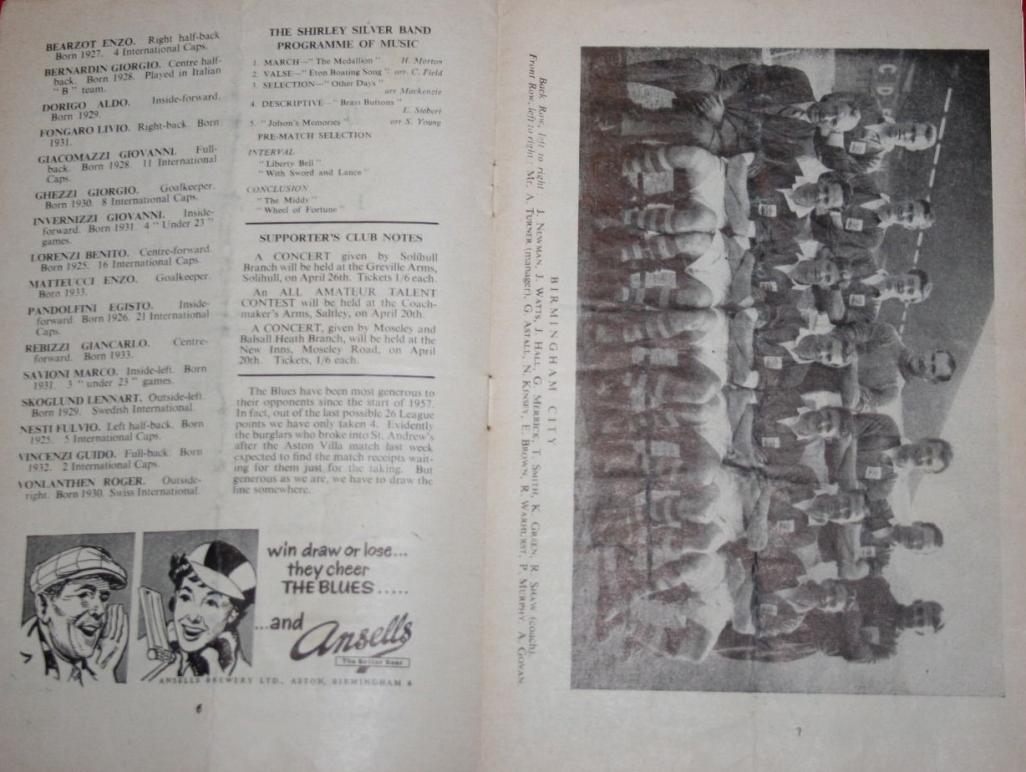