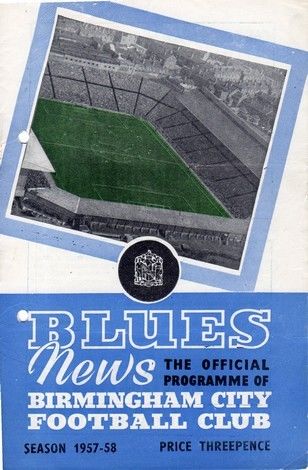 BLUES TAKE ON BARCA - 23 October 1957.
Some 18 months after taking their first tentative steps into competitive European action, Blues found themselves entertaining one of the greats of world football at St. Andrew´s. Having disposed of Inter Milan and Zurich in the group stages, the one and only Barcelona were next on the agenda for Arthur Turner and his troops.
Blues were two months into the 1957/58 season and had been struggling to find any consistency, lying 15th in the First Division table. Their opponents, meanwhile, were riding high in second in the Spanish League, two points behind Real Madrid with a game in hand, and they had thrashed their main rivals 6-1 in the cup earlier in the campaign.
A 14-man Barca squad trained at Elmdon ahead of the game under the watchful eye of manager Joseph Samitier and coach Doming Albania. The only English-speaking member of the party was interpreter William Mauchan, who made some bold statements in the build-up to the eagerly-awaited contest. "Barcelona will win everything this season. They will win the league and they will beat Blues," he declared, adding: "Last week they opened their ground - it is the biggest and best in the world."

BLOW FOR NEWMAN
Blues´ inside-right Johnny Newman was forced to miss the big cup game at St. Andrew´s after being laid low with flu. It was a big disappointment for the long-serving defender who had struggled to hold down a regular place in the side since arriving at the club as a promising teenager from Hereford Lads´ Club in 1949.
In fact only a few weeks prior to the Barcelona game the frustrated Newman came out in the press to say that he was seeking a transfer away from the club to try and get first team football. However, he was recalled by Arthur Turner for a home game against Preston in late September, which Blues won 3-1, and kept his place for the next five matches.
His latest appearance had been at Highbury where Blues geared up for their Fairs Cup semi-final in perfect fashion with an impressive 3-1 away victory and Newman played a key role in the success. That turned out to be his last game for Blues as he was transferred to Leicester City the following month.
Newman was replaced by Bunny Larkin, whose only other appearance that season came in a 7-1 defeat at Tottenham. Another player given a rare opportunity of a run-out in the big match was defender George Allen, who deputised for Ken Green with the full-back sidelined due to a back injury.

STAR KUBALA MISSES OUT
Blues were given a boost with the news that Barcelona would be without their star attraction, striker Ladislav Kubala. The 30-year-old, who represented three different countries, Czechoslovakia, Hungary and Spain, was feared throughout the world and a glance at his statistics tells you why - 131 goals in just 186 league games during his decade with Barca.
But Kubala was struck down by flu and the visitors were also without two other internationals in the form of Martin Verges, also flu, and Enrique Gensena, who had broken his arm in training. Barca could still boast five internationals amongst their ranks so it looked like being a formidable task for Arthur Turner´s Blues team.
Through the interpreter, Barcelona manager Jose Samitier commented: "It should be a good match. I think we are the more scientific team but the British go all out for the ball."


It was action all the way for the 30,000-plus crowd inside St. Andrew´s as Birmingham and Barcelona slugged out a seven-goal spectacular. If the Spanish side thought they would be in for an easy night and a chance to display their exhibition football, they were in for a rude awakening against a fired-up Blues team.
Arthur Turner´s charges were straight out of the blocks and opened the scoring after just two minutes through Eddy Brown, who nipped in as Barca goalkeeper Antonio Ramallets attempted to shepherd Bunny Larkin´s shot out of play. The shocked visitors hit back straight away as they scored directly from the restart as Justo Tejada picked up the ball on the left flank and curled a speculative shot over Gil Merrick into the net. This set the tone for the whole evening as the two teams traded goals in an end to end contest.
Jose Samitier´s side went in front through Evaristo De Macedo and the visitors threatened to run away with it as Eulugio Martinez and Ramon Villaverde both went close to adding a third goal but were denied by great saves from Merrick. Instead it was Blues´ turn to respond as Bryan Orritt poked the ball home from close range after Larkin´s cross was not cleared properly.
Barca stormed back and regained the advantage with the goal of the game as Villaverde controlled the ball on his chest before turning and hammering the ball past Merrick before the Blues keeper had a chance to move. But the topsy-turvy encounter took another turn as the hosts equalised again as Peter Murphy headed the ball past Ramallets.
After the interval Blues stepped up their tough-tackling approach to try and stem the tide of goals and ensure that the visitors weren´t given the time and space that allowed them to score three times in the opening 45 minutes. The tactic worked a treat and paid ultimate dividends when Murphy fired home the winner just after the hour, having seen a previous effort saved by Ramallets.
There was still time for Barca to miss a golden opportunity to go into the second leg on level terms as Villaverde fired over when he should have scored. After the game the Spanish side complained about Blues´ physical approach but Turner promised them more of the same at the Nou Camp. "These Spanish players are great ball players, but like a lot of continental sides, don´t like good, honest tackling. It would be fatal if we change styles in mid-stream when we go over there for the return match in three weeks´ time," said the Blues boss. 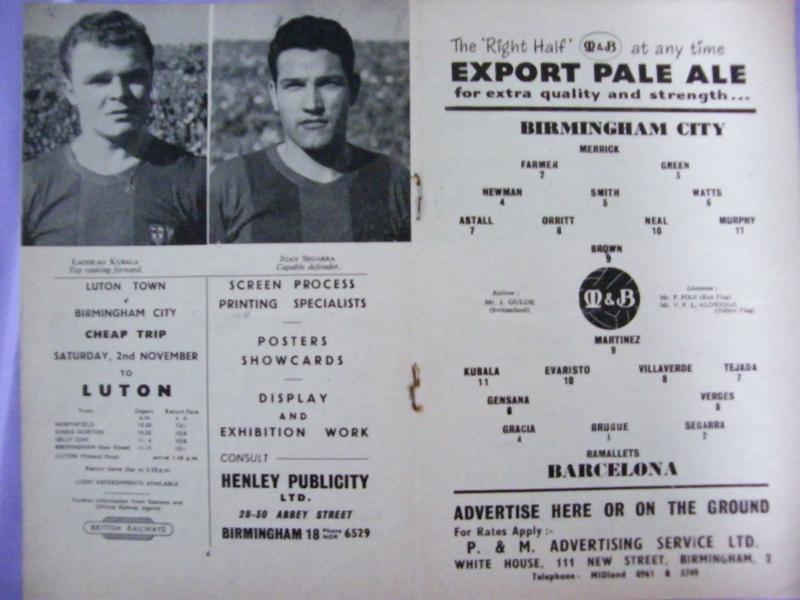