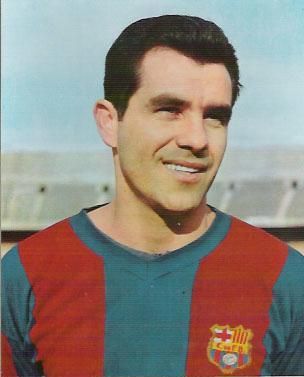 ЭВАРИСТО.
BRIGHT LIGHTS OF BASLE
After Hungarian hot shot Ladislav Kubala scored the only goal of the game for Barcelona in the Nou Camp second leg to level the aggregate score and break Blues´ hearts, the two clubs could not agree on a venue and to date to play the re-match.
In the end the competition authorities had to intervene and made a decision and their choice was St. Jakob Stadium in Basle on Tuesday 26 November 1957.
Blues would have preferred the previous week but both clubs were happy about the fact that the game would be played under floodlights which meant more gate money and indeed 20,000 spectators filled the ground, many of them neutral Swiss fans.
Although the majority of the locals were willing Blues to pull of a shock as their national side had lost to a Spain side containing three of the Barcelona team just three days earlier.

BLUES UNCHANGED
Blues boss Arthur Turner opted to field the same side that had remained unbeaten in their previous two league fixtures - a 2-0 win at Everton followed by a goalless draw at home to Blackpool. The Blues boss commented: "How can I change a side that has done so well?"
Turner did concede that Bunny Larkin had been unfortunate to miss out having played in the previous two matches against Barcelona. The Brummie wing-half sustained an injury during the game at the Nou Camp and was forced to play through the pain barrier after confusion over the allowance of substitutes. Blues were shocked when contrary to a pre-match agreement, the Spanish officials would not allow Johnny Watts to come on as a replacement for Larkin.
Watts subsequently played in the Division One games against The Toffeemen and the Seasiders and his performances persuaded Turner to stick with him for the Barca rematch.
Larkin still travelled with the squad and so did number two goalkeeper Johnny Schofield, even though Gil Merrick´s deputy had only recently been released from hospital after being hurt in a pit explosion at Baddesley Colliery. A Blues official said: "Johnny declared himself fit the day he left hospital. You know what he is like - mad for football! If Merrick is hurt the biggest problem will be trying to stop Johnny from playing."

BROWN´S BARCA-BLUES REPORT
So how did Blues fare in Basle? Well, who better to describe the goings-on than someone that actually played in the game?
The Birmingham Mail´s coverage of the game the following day was provided by the Blues number nine Eddy Brown! The striker was an unconventional type of footballer who often turned his hand to journalism. Here is Eddy´s report in full…
So it´s ´bye ´bye Blues. We´ve tried to bring a cup to St. Andrew´s for the first time and failed. We could have won - we nearly did - but there are no complaints from us.
We were beaten by a brilliant team of ball players who played up to their St. Andrew´s form. And from the way they reacted when the final whistle went I reckon these men from Barcelona were mighty relieved senors.
Best players on the Blues side were Gil Merrick - who had a very good game - and Trevor Smith.
The match atmosphere was tense - just like a cup final. The teams knew one another very well and there was a feeling that one slip would settle it.
Unfortunately we made that slip. About ten minutes from the end Dick Neal pushed a short ball towards the centre of the field when he should have played it towards the touchline. It was intercepted and Juarez pushed the ball through to Kubala who went round Smith and scored. Just one slip - and out we go!
Our best spell was the first ten or 15 minutes of the second half when we pressed really hard. We were on the attack all the time. As soon as one raid was beaten back, we were hitting back again. We were hard and forceful up front - not skilful - but the crowd seemed to appreciate it.
Five minutes after the break Peter Murphy equalised - and although the full-back kicked the ball away, the referee was on the spot to award a goal. Incidentally the referee is a good one by Continental standards.
And, about 15 minutes later, I could have won the match. I headed the ball really hard - it could have gone anywhere but it went straight at the goalkeeper and he saved!
In the first half I did get the ball into the net, but as I had punched the ball onto the bar in the first place, I did not expect to get away with that! As I say, this referee was smart.

ACCLAIM FOR TURNER´S TROOPS
The battling Blues side received the plaudits of the neutrals after the 2-1 defeat and even their illustrious opponents were full of praise.
Following three titanic battles, the Barcelona president Miro San said: "We needed 270 minutes to down Birmingham and by the closest score. I´m glad it´s over because they gave us a hard time. I was especially impressed by Merrick and Murphy."
Blues boss Arthur Turner commented: "We did not disgrace Birmingham by our display. We played well, defensively we were magnificent, but although we made more chances than Barcelona we did not take them. A few minutes from the end we gave the Spaniards a gift goal - and that was that.
"I should say that this has been an outstanding performance. We beat Milan, a fine side, and now we have narrowly lost to Barcelona - who are supposed to be one of the best club sides in Europe. I should say our performance was nearly as good as getting to Wembley (in the FA Cup final of 1956)
"For a 20-minute spell we had them in trouble. Their defence panicked and their goalkeeper made three or four fantastic saves."
Blues chairman Harry Morris vowed: "We will be back next year….at least we hope to represent our city again in the next cup series. It was a close contest. Maybe we will have better luck next time."
The magnitude of Blues´ achievements in pushing Barca all the way in three very even contests was shown up when the Spanish club hammered a London XI 8-2 on aggregate in the final. The London side was selected from all the clubs in the Capital and included the likes of Jack Kelsey, Danny Blanchflower and Jimmy Greaves. 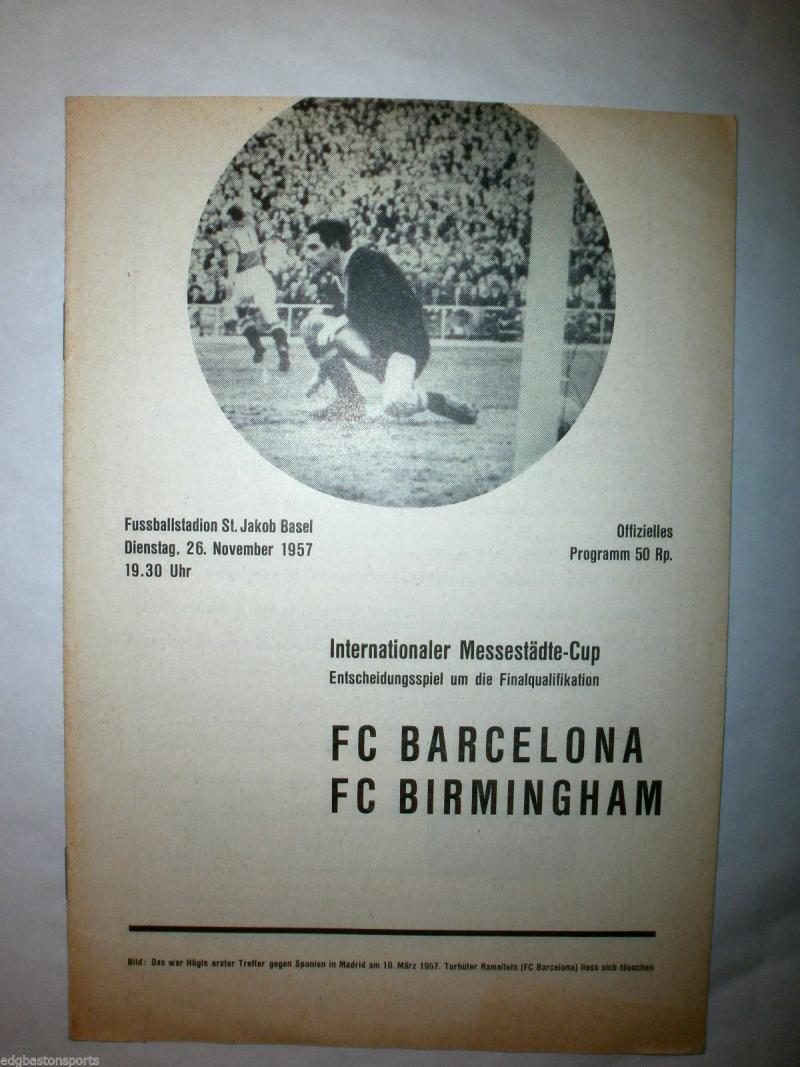 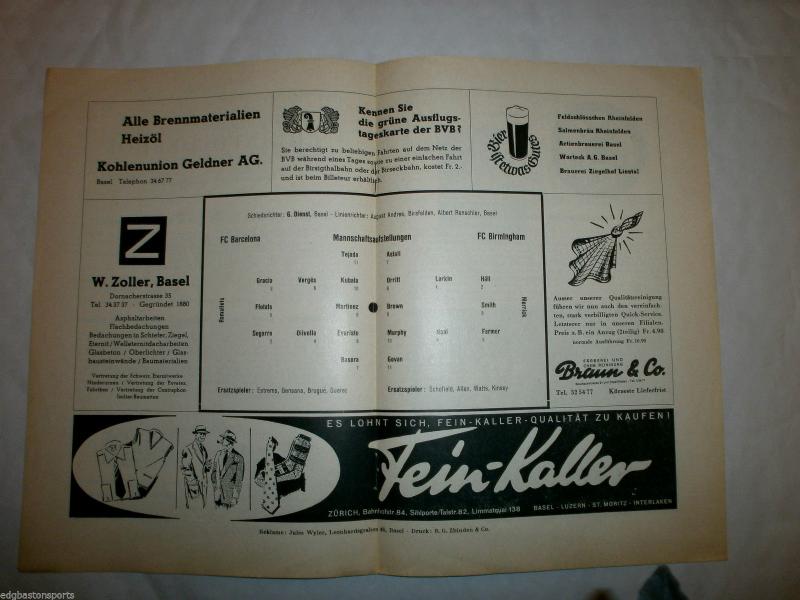