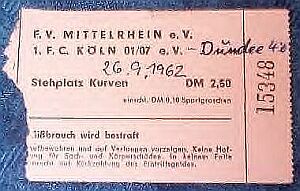 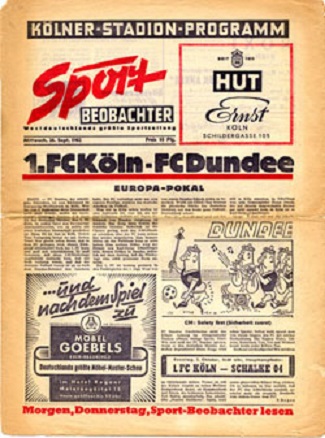 Cologne went back to the Rhineland after their first leg 8-1 humiliation in Dundee muttering threats of retaliation and which they carried through; very nearly progressing into the next round into the bargain. Upon leaving Dens Park, Cajkovski told the German press that the result in West Germany might be different “if say the Dundee goalkeeper was injured” and the signs were ominous at kick off when an ambulance was parked behind Bert Slater’s goal.

Cologne made five changes from the first leg, two of them positional and the big news for the home crowd was that star man Karl-Heinz Schellinger had made the line up. He had received extensive treatment on his injured knee in recent weeks and was deployed to man-mark Alan Gilzean, Dundee’s hat-trick hero from the first game.

Also in for the home side was goalkeeper Toni Schumacher to replace the unfortunate Ewert who was injured at Dens and right-back Fritz Pott, called up for West Germany’s match against Yugoslavia in Zagreb in seven days time while the Dundee side was unchanged.

40,000 horn-blowing expectant home fans were in the Mungerdorf Stadium and straight from kick off Cologne went on the attack in an attempt to overturn a seemingly impossible deficit. Their hopes were raised in the seventh minute however as they got off to the perfect start when they pulled an aggregate goal back from the penalty spot. Alex Hamilton punched a Hans Schafer goal bound header over the bar and inside-right Habig put the twelve-yard kick past Bert Slater to give the Germans a 1-0 lead on the night.

Cologne continued to put pressure on the Dundee goal in a bedlam of noise but they were guilty of a number of strong challenges which went unpunished by the Danish referee Mr Poulsen. Gordon Smith in particular was coming in for some rough treatment on the Dark Blues’ right-wing and any time a high ball came into Dundee box, Bert Slater had to endure some digs and punches in the ribs.

Worse was to come for the Dundee keeper however as on twenty-seven minutes he dived down low at the feet of striker Christian Muellar and he caught Slater with his boot with full force behind the ear. As trainer Sammy Kean ran on help Slater, blood oozed from the wound and Kean signalled to the bench that Slater would have to go off to receive some treatment from a doctor.

Almost immediately, the German medics tried to usher Slater into the awaiting ambulance and take him away to hospital. Sammy Kean signalled that he wanted his keeper to go to the dressing room which led to the bizarre sight of Slater jumping off the stretcher and bustling his way through the crowd towards the dressing room.

In the meantime a confab between the Dundee players saw nineteen year-old inside-right Andy Penman put on the goalkeeper’s sweater and take over from Slater in goal with Dundee now down to ten men. It didn’t take long for Cologne to take advantage of this when Christian Muellar doubled Cologne’s lead after a fine move down the right before Schafer made it 3-0 right on the stroke of half-time.

It was now 8-4 to Dundee on aggregate but the Dark Blues looked vulnerable and in disarray and in danger being on the end of one of the most remarkable turnarounds in two-legged football.

At the start of the second half, Bert Slater resumed, not in goal but out wide on the right wing. He head was swathed in a huge turban-like bandage and he showed some neat touches when the ball arrived at his feet. It had been decided not to risk him back in goal but after a couple of dashes down the touchline he ran back towards his own goal to swap jerseys with the gallant Penman and resume his duties between the sticks.

It was a turning point for Dundee as they regained their composure despite continued severe provocation. With Gilzean being well handled by Schellinger, Penman moved up field to take over the role of main spearhead while Cologne, when they needed their attacking impetus the most, found themselves having to pull men back to contain Dundee’s forwards.

On 57 minutes however Cologne did make it 4-0 when Ian Ure put through his own net with Slater impeded.

The Dark Blues now came under intense pressure again and just three minutes later conceded a second penalty when Ure mistimed his tackle on Thielen. The Billy Goats had a great chance to make it 8-6 on aggregate with still half an hour to go to get at least another two goals to force a third match on a neutral ground but fortunately for The Dee, Habig smashed his second penalty against the bar and with it went Cologne’s realistic chance of making the first round.

As the game wore on the ugliness persisted as the Danish referee continued to allow Cologne carte blanche to kick and punch the Dark Blues but with just a few minutes left on the clock, Ian Ure incredibly got his name taken for an innocuous looking foul.

This was the signal for the German crowd to pour forward from the terracing and stand six deep and menacing around the touchline. Dundee manager Bob Shankly tried to protest only to be told by a German customs official that this was normal in German matches but when Gordon Smith tried to make one of his trademark runs up the wing, he was tripped up by a fan who was standing on the edge of the playing surface.

The Dundee players were understandably hesitant to even take a throw-in and they tried to play the clock down but the final whistle did not bring any relief for the Dark Blues. The teams were trapped on the pitch as the crowd poured forward, horns blaring and the Dundee players were swamped in a frightening flood of bodies. Fists flew as Dundee struggled towards the dressing room but they were saved when hundreds of off-duty British Army servicemen from the Rhine Army, who were at the game to support Dundee, waded into the German crowd and threw a cordon around the team to get them off the pitch unhurt – or practically unhurt.

At the end of the match the final score was Cologne 4, Dundee 0 but it was the Dark Blues who progresssed to the First Round with an aggregate win of 8-5. It was a brave performance from The Dee, particularly from goalkeeper Bert Slater who was clearly a target from the start and Dundee started to wonder if participation in the European Cup was worth it, if scenes like the Mungerdorf witnessed were tolerated by the authorities.(dundeefc.co.uk). 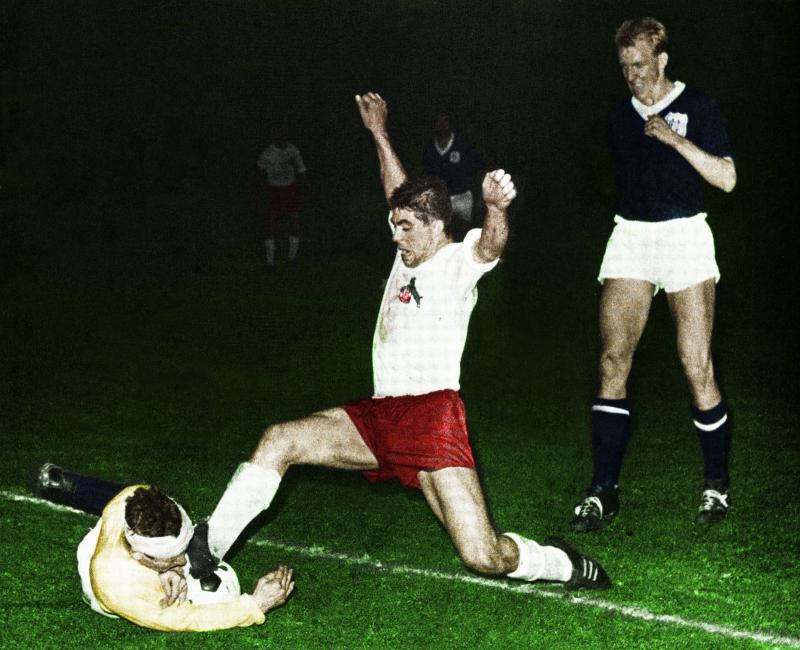 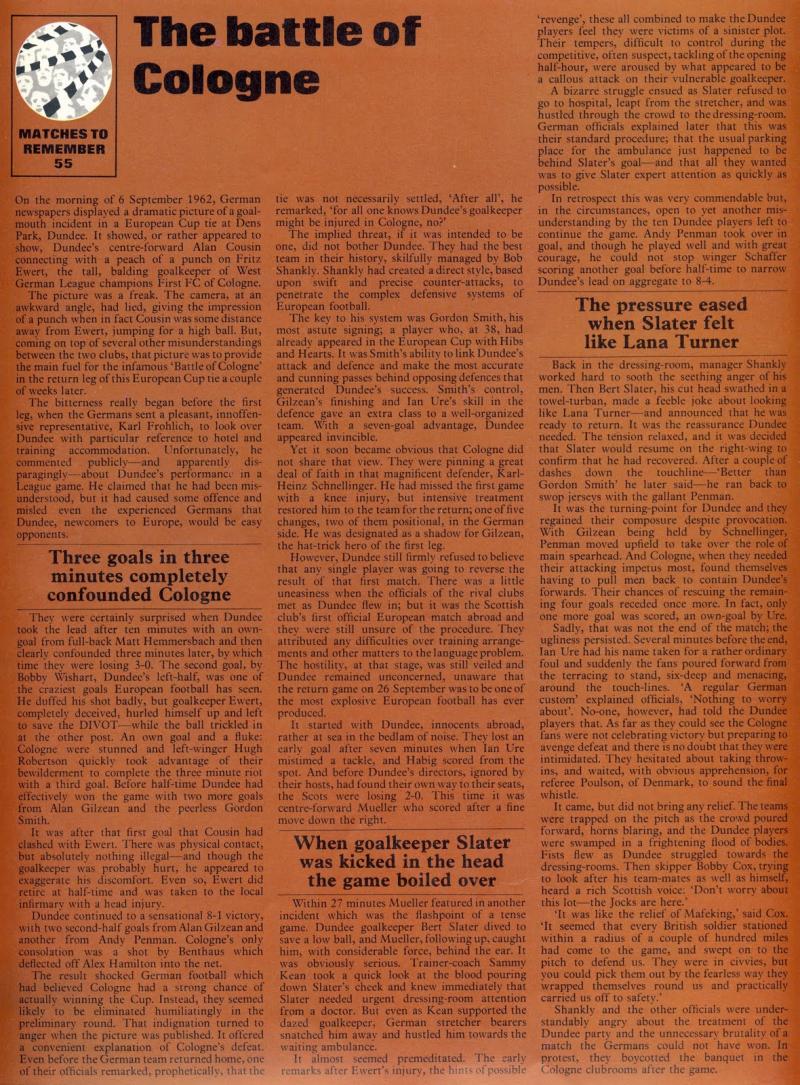 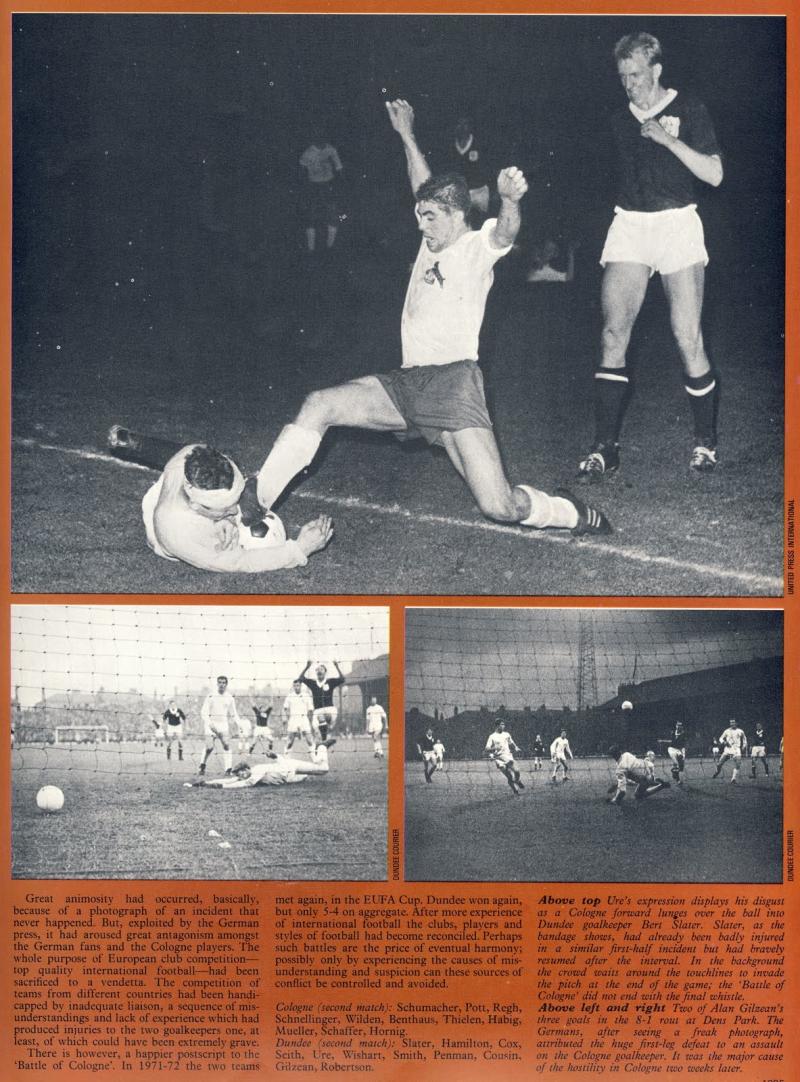